Scientific research builds on itself, so when past results cannot be reproduced, the foundations of science as we know it are called into question. Researchers understand this challenge on a personal level: according to one Nature survey, more than 70 percent report being unable to reproduce another scientist's experiments. On a larger scale, Amgen scientists illustrated that even high-profile, influential studies could be difficult to reproduce. While systematically attempting to confirm landmark, preclinical research in hematology and oncology, Amgen scientists found that they could only reproduce 6 out of 53 studies.

According to the Nature survey, this “reproducibility crisis” stems from systemic issues. However, advances in technology can integrate into the lab workflow to help researchers address challenges related to reproducibility. Connected instruments, for example, may help researchers to maintain complete, traceable, and shareable records of experiments with ease and efficiency.

"Publish or perish" is a term that has been used to describe the high-pressure, competitive culture of academia in which a scientist’s value is highly weighed based on their publication record.

The increasingly rapid pace of scientific research, combined with larger amounts of data, means it’s now more important than ever that routine steps or small changes to protocols be automatically recorded to ease the researcher's task list. Issues that arise during the preparation and execution of an experiment accounts for about a tenth of the errors that contribute to irreproducibility, according to a Global Biological Standards Institute study. Moreover, because journals are often less willing to publish negative results, researchers may feel bullied into recording data from experiments they think worked.

The increasingly rapid pace of scientific research, combined with larger amounts of data, means it’s now more important than ever that routine steps or small changes to protocols be automatically recorded to ease the researcher's task list.

Most scientists also know the pain of trying to replicate an experiment conducted many years ago based solely on information contained in a lab notebook. However, few scientists operate with the expectation that their lab notebook will be referred to even a year or two in the future. With the pressure to publish so strong, finding the time to share protocols can be difficult. It often means sifting back through several lab notebooks, which contain numerous projects progressing simultaneously, looking for one day’s worth of notes. Each protocol is usually handwritten with lines crossed out, and notes in the margins, which means that a clean version of the protocol must be typed up for clarity, with any additional details and pointers remembered retrospectively. Recording and communicating experimental protocols is an essential part of being a scientist, but in this digital age, there must be a better way.

When the term "publish or perish" was first coined in 1932, paper notebooks were used in labs everywhere, and computing technology was in its infancy. However, even as technology has advanced rapidly, and most data in labs is generated electronically, the use of the lab notebook has continued. While it’s true that paper notebooks may have some basic advantages, such as durability and low cost, using them in labs creates roadblocks to generate, retrieve, and share experimental data and protocols.

Technology such as TRACKMAN® Connected, part of the Gilson Connect platform, can help move us toward digital lab records and enable reproducibility. The pipetting platform is easy to use, improves recordkeeping, and facilitates protocol execution and sharing.

TRACKMAN Connected records every step of every pipetting protocol automatically, ensuring that all steps are accurately captured. Regardless of whether the results of an experiment are positive, negative, or unclear, the experimental data from that day are easily downloadable and stored for future reporting.

TRACKMAN Connected can also sync with electronic lab notebooks (ELN), such as SciNote, which is an open-source cloud-based ELN. Researchers can write pipetting protocols in their ELN and then upload them to TRACKMAN Connected. Additionally, TRACKMAN Connected records the pipetting experiment in real-time and generates a time-stamped report of all actions and experimental conditions, which in turn can be uploaded back to SciNote.

Once stored in SciNote, protocols and experimental reports can be organized and retrieved by a simple search. Complete reports can be shared between lab members or collaborators in an easy-to-read format. With digital reports, researchers could also address questions from reviewers during the publication process or allow reviewers to access the raw data and protocols if needed quickly. Because it is relatively simple to search and read digital records, the use of this information may accelerate the overall publication process.

Like any transition, a phased approach to a paperless lab can be easier to manage logistically. When searching for technology options it’s important to look for flexible solution. For example, Gilson’s connected technology can be slowly phased into current lab processes and alongside paper lab notebooks as needed.

Scientists are producing more data than ever and will need to adopt technology matched to the task of recording, organizing, and transmitting it. When the research community has access to "all the data," we can begin to unravel the external pressures that have contributed to the reproducibility crisis and elevate the quality of scientific records generated by the community.

Learn more about how the Gilson Connect system integrate with the SciNote electronic lab notebook. 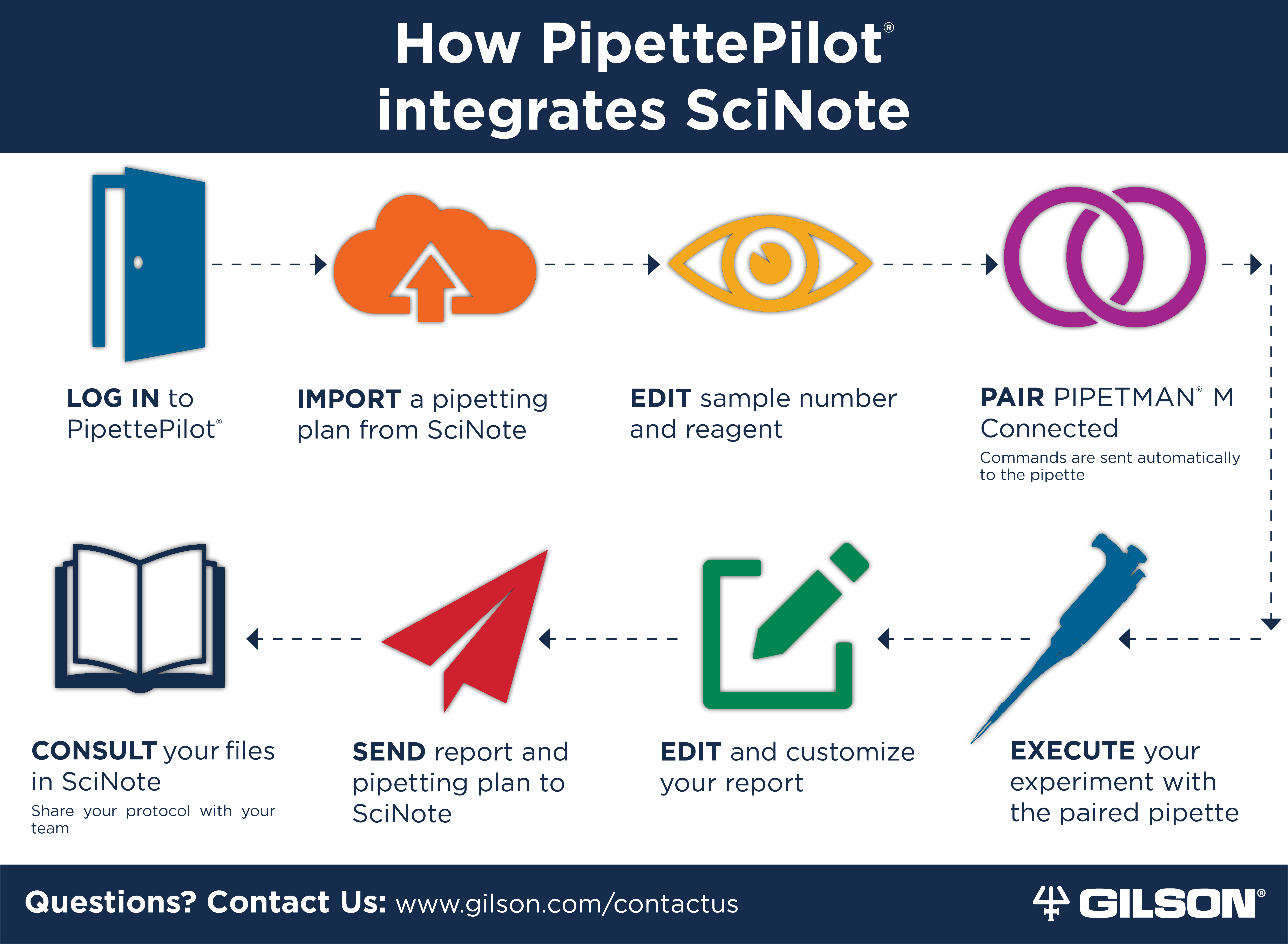